Tanzania Lateef, also known as Stormy Monday, is an American singer, songwriter, co-producer, and Cinema 7 recording artist. She was born in Washington D.C., raised in Baltimore, MD and San Bernardino, Ca, and currently resides in Philadelphia, PA. She is most known for her performances at The Black Lilly in Philly, background vocals for Patti Labelle and Bilal, as well as her mixtapes.

As a child Tanzania was exposed to various music genres through her parents including reggae, blues, classical, hip hop, funk, rock, tribal, house, and world music. Her first and biggest influence was Bob Marley, particularly his “Redemption Song”. Coming from a diverse background in music, she was also influenced to pursue her music career by Teena Marie, Anita Baker, Phoebe Snow, Mary J Blige, and Jodeci.

Tanzania came to Philly from Baltimore during the neo-soul explosion to perform at the popular club The Black Lilly where she could show off her vocals. She spent some time at Jazzy Jeff’s A Touch of Jazz studio and Mama’s Boy studio learning how to write and record. While signed at A Touch of Jazz, she met rapper/producer Baby Blak. They had an instant vibe and began to work together under his label Cinema 7 Multimedia Group.

In 2004, Tanzania recorded background vocals for Patti Labelle’s “Black Butterfly” on the Johnson Family Vacation Soundtrack. She also performed background vocals for Bilal at S.O.B.’s (Sounds of Brazil) in New York City. She has made various appearances performing at The Black Lilly and B-Boy BBQ in Philly and went on a mini tour with DJ Jazzy Jeff performing in London at the Jazz Café.

Tanzania has been featured on Baby Blak’s songs “Chess Move God”, “Cambridge Ghetto”, and “Black Man Rap (Ode To 98)”, Greg Porn’s “Salud”, and Aul Purpis’s “Wow”.  She currently has a mixtape out called “What’s The 911?” where she sings over hip hop beats starring various Philly emcees.

Currently, Tanzania is working on her album “Less Than Zero” which embodies the subjects of life, hustle, love, sex, party, pain, and joy. She is also working on two mixtapes, “White Widow” – a laid back red light feel, and “What’s The 911? Part 2” – a follow up to her first edition of melodies over hip hop beats. She is also featuring on Baby Blak’s mixtape “The Virgo Tape”, as well as working with fellow Cinema 7 producer Gross on his upcoming project.

Tanzania is focused on her career and determined to open new doors to opportunity and business ventures with her music and forthcoming albums. When not recording music, she works on her cooking series which includes cookbooks, videos, blog, and is starting a business with her mother. 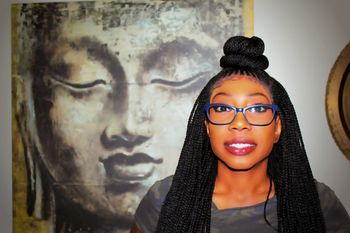